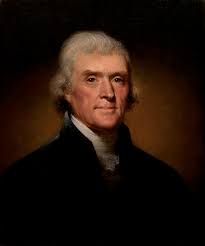 I find it interesting sometimes to contrast the narrow, vocational-based education system we have today with the kind of education system envisaged in the late 1700s. Often, the aim back then was to receive a broad-education in what today we understand as the liberal arts and sciences, before advancing onto a broad education as to one’s profession.

Specialization was frowned upon by the elite, in many ways because it led to narrow-mindedness. Beyond this, there was a distinct goal of cultivating ‘citizens’ in universities, people broadly trained to such an extent that they could lead by virtue of broad cultural knowledge and understanding of the world.

One such advocate was the American founding father, Thomas Jefferson, who wrote to a young man a letter of advice as to how he should proceed with his studies. You can find the letter in full below:

— I am honoured with your favour of the 16th instant, and desirous, without delay, of manifesting my wishes to be useful to you I shall venture to you some thoughts on the course of your studies, which must be submitted to the better choice with which you are surrounded.

A longer race through life may have entitled me to seize some truths which have not yet been presented to your observation & more intimate knowledge of the country in which you are to live & of the circumstances in which you will be placed, may enable me to point your attention to the branches of science which will administer the most to your happiness there.

The Study of Maths and Science:

The foundations which you have laid in languages and mathematics are proper for every superstructure. The former exercises our memory while that and no other faculty is yet matured & prevents our acquiring habits of idleness. The latter gives exercise to our reason, as soon as that has acquired a certain degree of strength, and stores the mind with truths which are useful in other branches of science.

At this moment then a second order of preparation is to commence. I shall propose to you that it be extensive, comprehending Astronomy, Natural Philosophy (or Physics), Natural History, Anatomy, Botany & Chemistry. No inquisitive mind will be content to be ignorant of any of these branches. But I would advise you to be contented with a course of lectures in most of them, without attempting to make yourself master of the whole. This is more than any genius joined to any length of life is equal to. You will find among them some one study to which your mind will more particularly attach itself. This then I would pursue & propose to attain eminence in. Your own country furnishes the most aliment for Natural History, Botany & Physics & as you express a fondness for the former you might make it your principal object, endeavoring however to make yourself more acquainted with the two latter than with other branches likely to be less useful. In fact you will find botany offering it’s charms to you at every step — during summer & Physics in every season.

All these branches of science will be better attained by attending courses of lectures in them. You are now in a place where the best courses upon earth are within your reach and being delivered in your native language — you lose no part of their benefit. Such an opportunity you will never again have. I would therefore strongly press on you to fix no other limit to your stay in Edinburgh than your having got through this whole course. The omission of any one part of it will be an affliction & loss to you as long as you live.

The Study of History:

Beside the comfort of knowledge, every science is auxiliary to every other. While you are attending these courses you can proceed by yourself in a regular series of historical reading. It would be a waste of time to attend a professor of this. It is to be acquired from books and if you pursue it by yourself you can accommodate it to your other reading so as to fill up those chasms of time not otherwise appropriated. There are portions of the day too when the mind should be eased, particularly after dinner it should be applied to lighter occupation: history is of this kind. It exercises principally the memory. Reflection also indeed is necessary but not generally in a laborious degree.

To conduct yourself in this branch of science you have only to consider what areas of it merit a grasp & what a particular attention, & in each area also to distinguish between the countries the knowledge of whose history will be useful & those where it suffices only to be not altogether ignorant. Having laid down your plan as to the branches of history you would pursue, the order of time will be your sufficient guide. After what you have read in ancient history I should suppose Millot’s digest would be useful & sufficient. The histories of Greece and Rome are worthy a good degree of attention, they should be read in the original authors. The transition from ancient to modern history will be best effected by reading Gibbon’s. Then a general history of the principal states of Europe, but particular ones of England. Here too the original writers are to be preferred. Kennet published a considerable collection of these in 3 vols. folio, but there are some others not in his collection well worth being read. After the history of England that of America will claim your attention. Here too original authors & not compilers are best. An author who writes of his own times or of times near his own presents in his own ideas & manner the best picture of the moment of which he writes. History need not be hurried but may give way to the other sciences because history can be pursued after you shall have left your present situation as well as while you remain in it.

The Study of Law:

When you shall have got through this second order of preparation the study of the law is to be begun. This like history is to be acquired from books. All the aid you will want will be a catalogue of the books to be read & the order in which they are to be read. It being absolutely indifferent in what place you carry on this reading I should propose your doing it in France. The advantages of this will be that you will at the same time acquire the habit of speaking French which is the object of a year or two. You may be giving attention to such of the fine arts as your turn may lead you to & you will be forming an acquaintance with the individuals & characters of a nation with whom we must long remain in the closest intimacy & to whom we are bound by the strong ties of gratitude and policy. A nation in short of the most amiable dispositions on earth, the whole mass of which is penetrated with an affection for us. You might before you return to your own country make a visit to Italy also.

I should have performed the office of but half a friend were I to confine myself to the improvement of the mind only. Knowledge indeed is a desirable, a lovely possession, but I do not scruple to say that health is more so. It is of little consequence to store the mind with science if the body be permitted to become debilitated. If the body be feeble, the mind will not be strong — the sovereign invigorator of the body is exercise, and of all exercises walking is best. A horse gives but a kind of half exercise, and a carriage is no better than a cradle. No one knows, till he tries, how easily a habit of walking is acquired. A person who never walked three miles will in the course of a month become able to walk 15 or 20 without fatigue. I have known some great walkers & had particular accounts of many more: and I never knew or heard of one who was not healthy & long lived. This species of exercise therefore is much to be advised. Should you be disposed to try it, as your health has been feeble, it will be necessary for you to begin with a little, & to increase it by degrees.

For the same reason you must probably at first ascribe to it the hours most precious for study, I mean those about the middle of the day. But when you shall find yourself strong you may venture to take your walks in the evening after the digestion of the dinner is pretty well over. This is making a compromise between health & study. The latter would be too much interrupted were you to take from it the early hours of the day and habit will soon render the evening’s exercise as salutary as that of the morning. I speak this from my own experience having, from an attachment to study, very early in life, made this arrangement of my time, having ever observed it, & still observing it, & always with perfect success.

Not less than two hours a day should be devoted to exercise, and the weather should be little regarded. A person not sick will not be injured by getting wet. It is but taking a cold bath which never gives a cold to any one. Brute animals are the most healthy, & they are exposed to all weather and, of men, those are healthiest who are the most exposed. The recipe of those two descriptions of beings is simple diet, exercise and the open air, be it’s state what it will; and we may venture to say that this recipe will give health & vigor to every other description.

— By this time I am sure you will think I have sermonized enough. I have given you indeed a lengthy lecture. I have been led through it by my zeal to serve you; if in the whole you find one useful counsel, that will be my reward, & a sufficient one. Few persons in your own country have started from as advantageous ground as that whereon you will be placed. Nature and fortune have been liberal to you. Every thing honourable or profitable there is placed within your own reach, and will depend on your own efforts. If these are exerted with assiduity, and guided by unswerving honesty, your success is infallible: and that it may be as great as you wish is the sincere desire of Dear Sir,

your most affectionate humble servant.

P.S. Be so good as to present me affectionately to your brother & cousin.