Since the late 1800s, the best law schools in common law countries have taught law by way of the case method.

Invented by Professor Christopher Columbus at Harvard Law School, the case method is based on the idea that law can be understood by reading cases. Langdell saw law as a science that could be understood by reference to internal rules and formulae. He created the first casebook in his class and gave students the task of reading cases and ‘finding’ the ratio decedendi, the reason behind a judge’s decision. According to the case method, a student must first ‘find’ a legal principle by uncovering a rule from a particular case. Once a student has found the legal principle, they are to apply that principle to a new set of factual circumstances, a hypothetical new case. Thus, students act like appellate court judges in determining how the law is applied. It is the decisions of judges in cases that reveal how the law is made, how it is changed and how it is justified.

Langdell’s ideas were very much based on the earlier thinking of the legal philosopher Hans Kelsen. In his book Pure Law, Kelsen argues that law should be studied in isolation, and be rid of the “baggage of the social sciences”. Instead of studying how law relates to politics, sociology, anthropology, economics, gender, race and so on, law is to be studied as a discipline unto itself. Each law can justify itself by reference to a prior law, and that law to a law before that. The highest piece of law, the constitution, can pre-suppose its own validity. In effect, this means that laws require no non-legal justification, but in fact, justify themselves.

Kelsen himself admitted that there was a deep flaw in his reasoning here. By deriving an ought (the law ought to be that way) from an is (the law is that way), he was committing a logical fallacy. According to David Hume, you cannot derive an ought from an is. Just because something is a certain way, doesn’t mean it ought to be that way. To give an example, just because America enforces the death penalty for certain crimes, does not mean it ought to have a death penalty at all. In an even clearer example, just because America had laws on slavery, does not mean it ought to have had laws on slavery. Although the case method provides a certain amount of predictability and stability, it does not adequately engage here with the ethical, moral and social injustices of bad laws.

Kelsen and Langdell’s strict adherence to an internal logic behind the legal order creates the perfect conditions for unjust laws. If we presume that all laws that exist ought to exist (and that no law can be questioned with anything other than other law), then almost every unjust law is justified. This is of course an absurd position. Towards the end of his life, Kelsen tied himself in knots trying to find a path through this logical mind field, only to fail and admit defeat.

Duncan Kennedy, among others, has argued that law schools train students to enter into a status quo hierarchy, with professionals on top and everyone else below. The case method and other systems are designed to enforce this status quo. A law graduate in an unjust regime would come to justify that regime’s laws simply by applying the case method. Imagine a law censoring political speech. The legal principle is that such speech should be punished. A law student gets a factual scenario of a political dissident. What do they write in response? The dissident should get punished. In some cases, students are allowed to go beyond the cases to discuss policy or statute. But even in this scenario, the policy and statute relied upon are those of the government, who in themselves could be corrupt, unjust or autocratic.

So what is a better way forward?

One argument is that law schools should abandon the case method altogether. Margaret Thornton argues that law schools should adopt a more holistic approach to legal education. This includes the re-absorption of the humanities back into the classroom, the teaching of critical thinking and essay writing. Students should be able to question what the law ought to be, rather than simply applying the law that already exists. A critical pedagogy would have students analysing cases, statutes and political decisions – not to find justifications, but to find holes, flaws and gaps in reasoning. A critical student ought to be able to propose law reform and to go on to promote a sense of justice and moral accountability in the community at large.

Law students are some of the only people in society trained and versed in law. Equipping them with a critical mindset would allow graduate lawyers to hold governments accountable for unjust laws. A liberal democratic society requires this kind of accountability in order for the public to maintain faith with the legal system as a whole.

It is difficult to understand why Langdell and Kelsen were so hell-bent on abolishing the humanities from law school classrooms. But it is easy to see now, with retrospect, why that was a terrible idea. Students require knowledge of how the law connects with politics, economics, sociology and other disciplines in order to truly understand the law itself. Without knowledge of these connections, they will never understand where the law comes from, how it works and whom it affects.

It is unfortunate that the entirety of modern legal education was built upon a logical fallacy, but there is an opportunity today to go in a new direction, towards new teaching methods and new assessment types. If we embrace this opportunity, there’s no telling what kind of lawyers we can produce.

This is related to my book: Legal Education, Privatization and the Market.

Buy it now in Paperback on Amazon 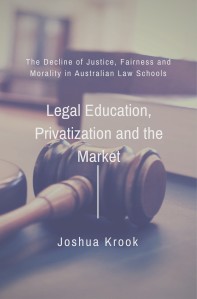