In 2016, I had the idea of creating a video game based on courtroom dramas that I enjoyed watching at the time. My favourite legal drama at the time was Boston Legal, which included witty repartee, court drama and pressing moral and ethical decisions. I was heavily inspired by this combination of comedy and serious drama and wanted to recreate this in a game.

Inspired by the genre and my own history learning law, I started developing the concept further into a narrative. The most popular legal narrative is that of the murder case with multiple suspects. Crime fiction (from Agatha Christie to Raymond Chandler) is full of these types of scenarios, where a group of characters turn up to an isolated [‘closed circle’] environment, only for one of them to be murdered during the course of the night. Famous scenarios include islands where no one can leave or train carriages, as in the case of the recent blockbuster film, Murder on the Orient Express.

With a murder case as the narrative and a script already underway, I began considering various gameplay ideas, mechanics and limitations.

I had not yet played the most famous other game in this genre: Phoenix Wright: Ace Attorney. But I knew vaguely that that game involved extensive dialogue, with a hunt for clues and various components to solve a case. I later learnt that Phoenix Wright relied heavily on witness cross-examination, where witnesses would be confronted with evidence contrary to that which they had stated. This created a level of drama and intrigue similar to the TV dramas I enjoyed.

Despite a long history in 3D art, I decided to make a 2D game. This was my first, and biggest, mistake. My latest game, “The Cinema Rosa” is based in 3D and has been a much easier experience in development than Twelve Absent Men. I believe it is okay to select a format you are unfamiliar with, so long as you are ready to commit the time necessary to learn new skills. If choosing to design in 2D, for instance, a rudimentary understanding of drawing and animation would greatly assist in the design process. These were skills I lacked and so I was heavily reliant on others during the early stages of the project.

My second mistake was to rely on others for the most crucial aspect of development: coding. I believe now that the primary developer (or the main people on a team) should be programmers, rather than artists. This is mostly to avoid a situation that happened to me where a programmer can become too busy to work on the project, or a new programmer cannot keep up with what has already been done on the project before. I believe that the initial starting team on a project should have the sufficient skills to complete at least a very basic version of the project, without having to rely solely on outsourcing or other paid assistance. Outsourcing, in my experience, works far better for art than for coding.

My final mistake with picking 2D instead of 3D is that the most famous game in the genre, Ace Attorney, was a 2D game. It is important when competing with major titles to have a significant level of difference between what you are making and what already exists. This helps both with press (you can advertise your point of difference as a major reason to be featured), and it also helps in terms of motivation (your point of difference can be a rallying cry for your team). It also is a great way to get customers interested in something new and different, which are the main buzzwords in gaming these days.

The Mistake of Not Picking 3D:

In the early stages of development, I created a test environment in 3D. This environment was highly successful in terms of market appeal. I quickly landed an article about the development of the environment (https://80.lv/articles/josh-krook-courtroom-breakdown/), and got various comments praising the look of the courtroom.

It’s important in game design to play to your strengths. My strength in 3D art was a major asset to the project, which was completely irrelevant when designing a 2D game. Had my strength been relied on more, I could have used my 3D environments to promote the game further, get better press and spread the word. As it was, I had to rely on the art of 2D artists, with minimal supervision. While I enjoyed what they created, many players critiqued the art style and by the time the game was done and ready to go, there was no time or ability to change the art to suit player demand.

As a murder mystery game/case, the easiest place to start your plot is at the scene of the crime. The original idea was to have a Gatsby-inspired party scene, where the host has a set of eccentric guests over for a party, and by the end of the night, the host ends up dead.

This idea was developed further and further, with ideas on characters built into the scene over time.

The final version of this idea can be seen in the cinematic trailer:

The art of a 2D court game begins and ends with character design. The most important thing to me was to have each character appear unique, so that the player could identify everyone on face alone.

A courtroom game in general will have several obvious characters. There will always be a judge, two lawyers and a set of witnesses. The bailiff in Twelve Absent Men was a nice addition, as someone who could keep the peace in the courtroom.

The idea was to give each character a unique silhouette and a unique color pallette. They would all, of course, have a motive for the murder. This motive generally related to their profession in some way (e.g. the banker had a money motive). It was important to tie in their motive to the design of the character, so that the game would play out in a fairly logical manner.

In terms of style, I wanted the characters to look like most modern American animations (chiefly, the design was inspired by Archer).

Here are some of the final images of characters: 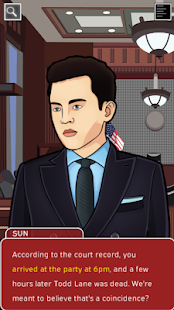 Originally, the game was going to have various endings depending on the choices the player made. This did indeed come about, but the endings were far less meaningful and consequential than intended. I initially wanted some endings to be completely ridiculous (for instance, a witness getting up and walking out of the courtroom; a gunfight; a portal to another dimension opening). Instead, the endings were fairly standard. The lawyer would accuse someone of committing the crime, and if you got it right, you triggered a confession. If you got it wrong, the wrong person went to prison.

This did feel meaningful, but there were other problems with this kind of ending. Namely, it relied on players remembering a lot about the evidence without having a chance to look it over thoroughly.

Finally, there was also a major bug in the Mac version that prevented players from reaching any ending – something which came down to a Software choice problem. The version of GameMaker I used is notoriously bad at running on iOS.

Speed of the Game, Wit, Comedy:

Again, inspired by Boston Legal, I wanted the game to play out quite fast. I wanted snappy, witty dialogue and a lot of back and forth between the lawyers, the bailiff, the judge and the witnesses. My idea was to make the judge quite cranky, the lawyers antagonistic towards each other and the bailiff the peace keeper, constantly interrupting to try and keep things from getting out of hand. However, I also wanted things to get out of hand, and often. I wanted ridiculous dialogue options and crazy options to be the norm.

A lot of the speed and wit of the game can be seen in the final release trailer:

The game begins with you, the lawyer protagonist, introduced to a defendant who has been charged with murder. The ultimate game of the goal, therefore, is to prove your client is not guilty. That said however, building on the choices and consequences theme, there is a possibility that you definitively prove your client guilty (by selecting certain evidence), there is also a possibility that you prove your client not-guilty but you don’t reveal the guilty party. Guilty and innocence is a very convenient way to end a game, and so there was not much work needed to teach the player what the goal of the game was. In a courtroom, the goal is almost intuitive, in part, because our culture is saturated with legal drama media. 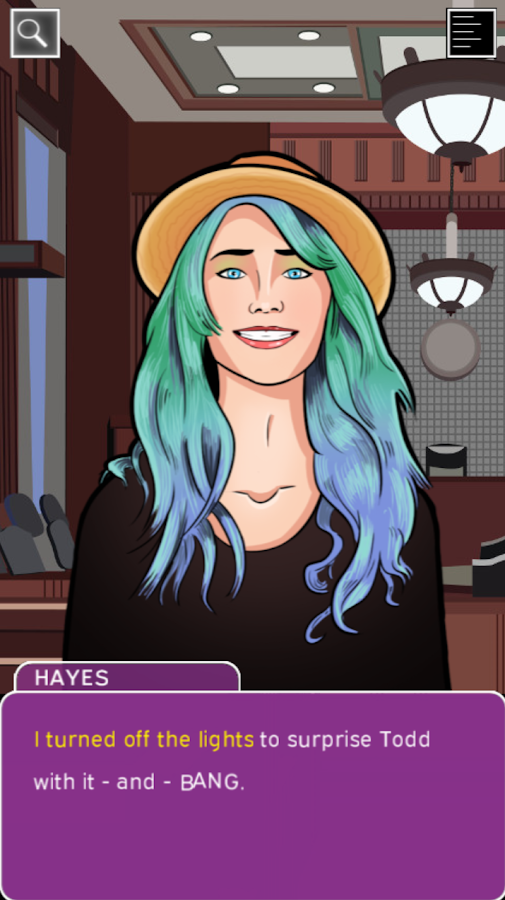 Twelve Absent Men was a funny and interesting game that had a lot of potential. Several key problems in development however, caused a shaky and ultimately unsuccessful launch. These included: the choice of 2D over 3D, the lack of a consistent programmer and the choice of GameMaker as a software tool.

Aside from these difficulties, there were the difficulties faced by any indie game designer. Getting marketing out about a game is extremely difficult in an oversaturated marketplace. It is difficult to get the attention of gaming journalists (only 3 articles were written about Twelve Absent Men, 2 by the same person). It was basically impossible to get YouTube streamers interested in playing, despite months of work to do so. Finally, online critics are vicious when it comes to bugs in indie games, and they often expect the same quality level as a billion-dollar company, from a one-to-three person development team. These were ultimately the most difficult hurdles to overcome.